Last Week I got confused and didn't get my Guest Author Posted.  So here you go.   Better late than never because  its a good one. 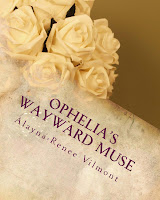 Hello to all! My name is Alayna-Renee Vilmont, and I’m the author of “Ophelia’s Wayward Muse”, a poetic anthology published in November of 2012. In addition, I’ve been a fairly well-known blogger since 2000, and am the voice behind Jaded Elegance: The Uninhibited Adventures Of A Chic Web Geek.

I grew up as a creative child obsessed with self-expression. Despite the fact that I had a hopelessly introverted nature until about the age of 4--- I wouldn’t make eye contact with strangers and preferred playing in my own little world of imagination to being interrupted by anyone else—I always had a natural sense of curiosity. I learned to read at the age of two. I remember my mother telling me she thought I might be gifted with a photographic memory, because she’d read me a story, and one day, I’d decide to read it back to her. Much to my dismay, my parents switched out all my Little Golden Books and replaced them with others I didn’t know and love. When I started reading the new books to my mother, it became apparent that my gift wasn’t one of a photographic memory, but for language.

By the time I was five, I went through a major personality change, one that involved me needing to share everything in my head with another person. I ended up at a pre-school called Montessori, which specialized in working with kids who might succeed in a more “outside-the-box” environment. I’d been kicked out of two pre-schools prior to that, because I asked a lot of questions and wasn’t a big rule follower. I got bored easily. Today, I’d probably just have been given some Ritalin and never learned that self-expression was meant to be a huge part of my life.

At 5, I started piano lessons, and because I had a habit of singing along with anything, my teachers discovered I had perfect pitch. By 6, I had done my first professional show in the world of musical theatre, and I never looked back. I spent my lifetime singing, dancing, acting, performing for anyone who would let me.

I always maintained a passion for writing, though. When I was 7, I decided to enter a local poetry contest for kids, which I won. I thought it was the coolest thing ever to see my name in print, so I started researching how to become a writer. Later that year, I started mailing copies of my poems off to small literary journals, and I had my first poem published. It was called “Victorian Garden”, and nobody had any idea it was written by a child. In fact, I signed a release saying I was 13 so I wouldn’t have to get adult permission. I don’t know why. I always felt as if performing was something I did for everyone else, but writing was a secret hobby just for me.

By the time I was actually an adolescent, I participated in this program called Center For Talented Youth (CTY). It was a summer camp where you spent three weeks (or six, if you attended two sessions) taking a freshman or sophomore college level course. In order to qualify, you had to get a certain score on your SAT. My math score didn’t qualify me to take any of those classes, but my verbal score certainly did, so I spent part of every summer learning to write. Some of the best memories of my childhood are from that program (someone I met and with whom I later reconnected in a totally different city would later become a fiancé of mine.), and it also gave me the advantage of earning enough college credits that I completed a five-year program in four. By the time I made it to college, I was able to complete a double major and earn a minor in Creative Writing, while still continuing to perform professionally.

I really never meant to become a writer. Over the years, I’ve had a lifetime full of adventures and opportunities, and I traveled in many different directions. There have been a lot of ups and downs. Sometimes, I reflect and realize I have the life experience of someone twice my age, and that’s a little overwhelming---but it also occurred to me that it means I have plenty of stories to be told.

By the time I’d gotten around to publishing “Ophelia’s Wayward Muse”, I’d already been a successful blogger for nearly a decade and was working as a professional freelance writer. I think I did it for no other reason than to cross something off of my to-do list, and to also make a statement to all those who didn’t much like me or believe in me. If people don’t know me or understand me, it’s easy to mistake me for being a bit more frivolous than I am, and a little less intellectual. I run a social group for 1800+ people in my free time, I work from home, I’m involved in the Atlanta literary scene, I love all facets of the performing arts, I’m a bit addicted to fashion, and I love my reality television. It might appear that my only concern in life is being me, and all my stories and anecdotes and past travels and relationship dramas are something I portray rather lightly. In reality, those experiences all affect me a great deal, and have gone a long way into shaping who I am today, positively and negatively.

I’d been writing poems and hiding them under my bed for most of my life, so when the idea for “Ophelia’s Wayward Muse” came into my head, it was this pervasive thought that couldn’t let go. I’d been speaking with a few people in my life about the idea of the “manic pixie dream girl”, a stereotypical character in film that’s often portrayed as a free-spirit who exists to inspire others, but in herself lacks meaning or substance. It is, of course, an idea and not a type of person one can be in real life, but it became painfully obvious that in many facets of my life and many relationships, I’d been this kind of person for many people. I had always wondered why I had such an easy time meeting people, dating, and even finding people to fall in love with me, but couldn’t ever seem to hold a long-term relationship together. I felt sad realizing I’d effectively been a part of so many lives in order to help others become who they were meant to be, only to be abandoned. I’m not an ingénue, and I didn’t want to be a “manic pixie dream girl”. I always considered myself much stronger and more independent than that. When someone I cared for a great deal pointed out that in many ways, I wasn’t, and that’s why he didn’t consider me that monogamous, long-term relationship material despite mutual attraction and respect, I started to form the thread of the storyline that would become “Ophelia’s Wayward Muse”.

In so many ways, Shakespeare’s Ophelia is written as the feminine ideal---she is young, she is virtuous, she is obedient, she is pretty, she is not yet sophisticated enough to know how to scheme or manipulate. The only power she has is her passivity. The fact that so many artists, writers, poets, musicians, and theatrical folks have paid homage to Ophelia over the years as an icon of femininity seems a little sad. It is almost an anti-feminist statement. Ophelia was the original manic pixie dream girl, but when she started to have thoughts and ideas and feelings of her own, when she started to grow into a woman and embrace sexual maturity, the scorn and derision of men literally drove her crazy. I think she killed herself not because the boy she loved went insane and she didn’t care to get herself to that nunnery, but she didn’t know how or why she was meant to exist without being a muse to someone, that untouchable object of adoration.

Although feminism has come a long way, we still live in a world that sends out mixed messages to women about gender roles, sexuality, relationships, and what type of person is a “good” person to become. “Ophelia’s Wayward Muse” explores the different ways that human connections, even if most of them are impermanent, form who we are as we go through the various stages of life. If Ophelia had been a teenage girl today, she might have chosen to dye her hair black and get tattoos and have an affair with a completely inappropriate man (or woman) instead of losing herself in insanity and committing suicide. She would not necessarily feel the pressure to exist in order to obey and inspire, but to look at the world and relationships as something capable of inspiring her.
People often ask me “Why Ophelia?” There are numerous literary and cultural references to young damsels in distress who met a tragic end rather than fight to find a voice. I think it’s because the character has been so immortalized through art as “This is what innocence looks like, and innocence is beautiful, and women are beautiful as long as they remain this.” Natalie Merchant actually wrote an album entitled “Ophelia”, and the title song puts Ophelia in all these rebellious roles throughout the history of society. She’s commenting on the “virgin-prostitute” and “inspirer-creator” dichotomy women have always faced. Innocence and unsophistication doesn’t have to be the essence of femininity, and passivity and compliance isn’t something to which today’s young women should aspire.

More than a statement about modern-day feminism, “Ophelia’s Wayward Muse” is a story of connection and how each person who touches our lives is mean to change us in some way. It’s a coming-of-age story that’s neither overly romanticized nor bitter and jaded. It is just reality expressed via emotion, two things people seem remarkably afraid of these days. I’m very passionate about the idea of understanding connection, how people relate to one another, and how that is changing---and not always for the better---in the face of what is becoming a more emotionally detached world.

I hope some of you will take the time to read “Ophelia’s Wayward Muse”, available on Amazon and through Lulu.com in simple .pdf version. Also, if you’d like to follow the adventures of a modern day muse, visit my blog at www.jadedelegance.net 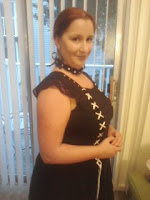